Last Saturday, as SpaceX, prepared to attempt the Crew Dragon Demo-2 mission for the second time, over ten million people tuned in to watch #LaunchAmerica. For the first time in almost nine years, America was about to launch “American astronauts to space in an American made rocket, from American soil”. It was a proud moment for the USA, and they made a big show of it, like always.

Among the many millions of viewers that tuned in, a group of Indian space entrepreneurs who had been actively following the developments celebrated the remarkable endeavour of human spaceflight.

A new era in Human Spaceflight

For many many space enthusiasts around the world, the success of the Crew Dragon Demo-2 mission was inspiring and unprecedented in various ways.

In 2011, after the space shuttle was retired, the NASA Commercial Crew Program began. At this time, the USA was wholly-dependent on Russian Soyuz rockets to hail rides for astronauts to and from the ISS. The aim of this program was to privately develop — within America — space transportation systems that would take astronauts to and bring them back from space safely, from American soil. Boeing, with its CST-100 Starliner capsule, and SpaceX with the Crew Dragon capsule, competed till the final leg of the program to achieve this milestone. Both were competing under multi-billion dollar development contracts with NASA. SpaceX won this race, with the success of their Crew Dragon Demo-2 mission last Saturday.

The rocket booster was recovered with potential for reuse, like any other Falcon 9 booster. The astronauts, wearing cool new stylish spacesuits, were transported to the launchpad aboard Tesla Model Xs with their futuristic looking falcon-wing doors. The SpaceX Crew Dragon capsule is the first-ever with a large touchscreen-based interface and control panel, instead of a myriad of dials, buttons, switches, etc. The capsule also carried with the two human astronauts, “Tremor” – a sparkly apatosaurus toy that was seen floating around the capsule acting as a zero-gravity (orbital insertion) indicator for viewers around the world.

No knobs, buttons or flight sequence written on paper, #CrewDragon and the astronauts have touch screens that are seamless and efficient to use. Their gloves are also specially designed to let the astronauts touch the screen effortlessly. pic.twitter.com/ONrq8Njhet

With all of that, it was also for the first time ever that astronauts have gone to space in a capsule and rocket completely developed, manufactured, owned and operated by a private company. With this milestone, human spaceflight has, for the first time in history, the means and potential to become a completely private affair. Individuals can now literally buy a ticket to space, although SpaceX is yet to announce any such sales.

The mission brought spaceflight to the 21st century, and it did this in style.

This mission and other efforts by SpaceX have made a large impact on the public perception of space and spaceflight. They have single-handedly inspired a whole generation of space explorers, scientists, and rocket enthusiasts – not just in America but across the globe. In doing so, they have also created completely new opportunities of doing business in space – such as the first commercial, privately developed, non-academic Indian satellite (ExseedSat-1) launched by the Falcon 9 in December 2018, albeit not on an Indian rocket. 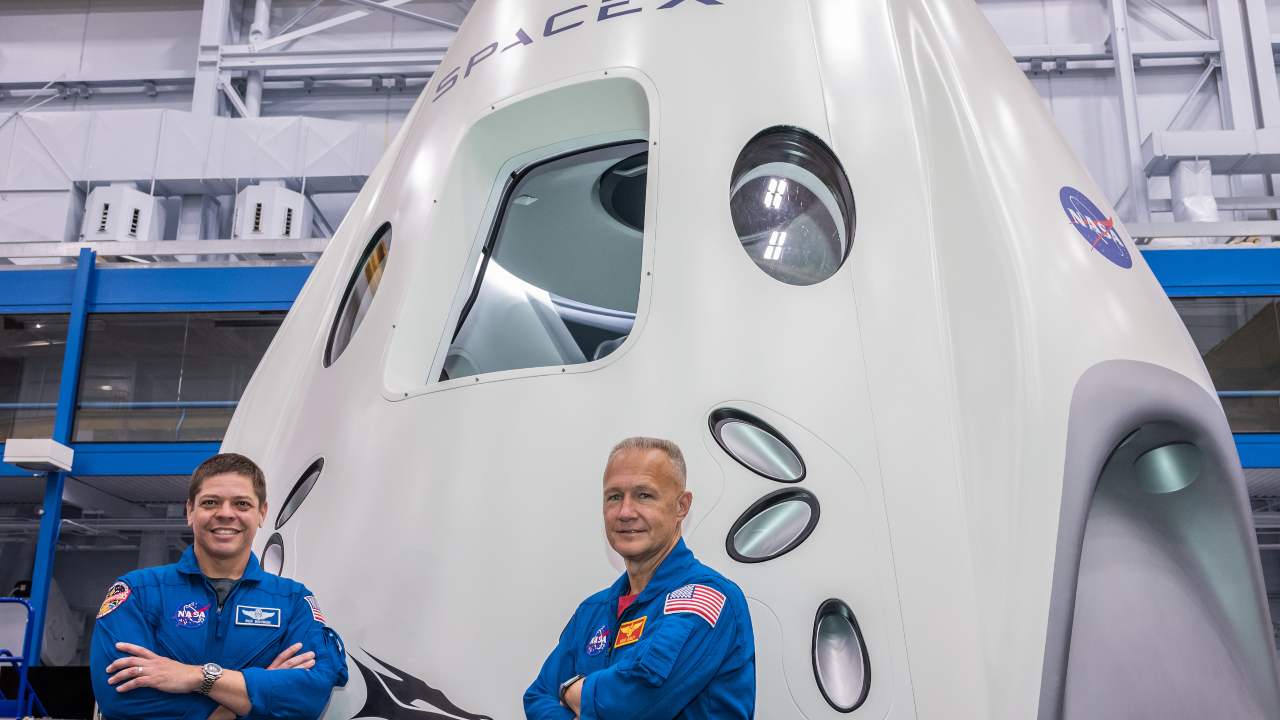 SpaceX Demo-2 capsule with NASA astronauts Doug Hurley and Bob Behnken ahead of their trip to the Space Station. Image: NASA

The world’s only civilian-first space program

The Indian Space Research Organisation (ISRO) was set up on the daring and unprecedented vision of Vikram Sarabhai – “To be second to none in the implementation and application of space technology for the benefit of society”. ISRO emerged to be a world-leading space program and the only one which did not evolve from military needs or national pride, but purely from the intent to benefit society. This vision that served us well for the last 5 decades, now grows old and outdated in the 21st century.

Developments like the Demo-2 mission and others have slowly created the critical mass around the discourse of encouraging and growing private participation in the Indian space economy.

India has mulled over opening up the sector to private participation many times and has a messy history of ISRO both embracing and denying private participation in different instances. There have been discussions in various industry forums about the privatisation of the PSLV for almost 15 years now, and even so, ISRO continues to operate the rocket on its own, with private players only acting as contracted manufacturers for components and subcomponents. Another instance of ISRO trying to embrace the private industry, but faltering was the Devas-Antrix Debacle.

But as the global space economy undergoes a massive disruption, and space becomes highly entrepreneurial, India is faced with a choice to either stand on the sidelines and watch as we lose our position and eminence in space technology on the global front, or to make changes and adapt to this dynamic and exciting future of human spaceflight. I think these disruptive changes in the global space landscape have culminated in another attempt by the Indian government to seed a world-leading space industry in the country through major structural reforms. That said, mere announcements won’t do.

India is in dire need of a law and policy framework that enables Indian space startups and encourages their excellence. Just minor changes such as providing access to ISRO facilities — while a crucial step in the right direction — will not go a long way in creating the ecosystem we have potential for. Various issues plague Indian rocket and satellite manufacturers that need addressing – GST, liability, insurance, orbital slotting, frequency allocation, launch permissions, among others. While the more downstream companies that want to dream up products and services requiring satellite data and the use of Indian space infrastructure (think NAVIC) need a more transparent and equitable data acquisition and use policy. These issues and more have limited the Indian space ecosystem from really flourishing.

There have been many proposals to highlight possible reforms, from the space activities bill to setting up a separate regulator and enforcer the likes of TRAI and TDSAT for the telecom industry. I personally believe setting up a single-window licensing system that provides all clearances and licenses needed to build, launch and operate space hardware combined with a data policy that allows for satellite data to be traded in the market freely like any other commodity, would go a long way. We also need to ensure that the clearances are not discretionary and can be acquired by any company that wishes to do so. A specific, limited and exhaustive set of exceptions may be listed based on criteria such as national security, OST compliance and more.

As we see the world change rapidly and spaceflight becomes accessible to private individuals and not just nation-states, this change needs to be ushered in. But we should be fast, lest it becomes too late. The ISRO spacesuit for astronauts in the Gaganyaan mission, displayed at the Bengaluru Space Expo. Image credit: Twitter/Nagarjun Dwarkanath

The private Indian space enterprise should also see the writing on the wall. As much as the Demo-2 mission signalled an exciting new era of human spaceflight, it was also an American dream fulfilled – America’s attempt to protect and grow its strategic interests in space. While the commercial crew program began almost a decade ago, the culmination of it comes on the heels of the Artemis accords, and a presidential executive order paving the way for the USA to mine and use resources from the Moon for scientific or commercial purposes.

Today, the USA has the policy, the laws, the entrepreneurs and the capabilities to make claims and do what it pleases where space resources are concerned. While other nations like China and Russia are strong competitors, India has a unique advantage. She is poised to be the one, truly capable, civilian-driven space program that can take human values to space – and not just military might.

As India prepares to completely reimagine its space enterprise in this new era, the private Indian space enterprise needs to envision the kinds of technologies that will grow this industry in the decades to come.

The author is an ex-ISRO, space industry enthusiast, and founder of Rocketeers, India’s only manufacturer for commercial model and amateur rocketry systems.

Global efforts to slow down the coronavirus are inadvertently accelerating the...