On paper, the PLAYGO BH70 is capable of going toe-to-toe with the best-in-class. But even though it tries really hard to pack everything useful in a pair of headphones — and I appreciate the sincere effort — it falls short on some things that an able pair of ears just can’t miss. In the following paragraphs, allow me to explain why you should or shouldn’t buy these headphones, and what you should consider buying instead. This will be especially useful to people who don’t wish to spend more than Rs 15,000 on a pair of all-purpose headphones, ever.

At a time when most gadgets have embraced the beauty of vibrant colours, the PLAYGO BH70 comes in two dull, unimaginative SKUs: Graphite Grey and Medallion Brown. At least a bright silver option would have been nice. For a brand called Play, it’s no fun at all.


In terms of comfort, the leather padding on the headband and around the ear cups is nice and locks the headphones in place. But the pair has been constructed around a gradient plastic skeleton, which does not feel solid or justify the 300 grams weight.

Although most people would use a good pair of headphones for music, if you happen to wear these on a brisk walk while listening to an audio book like I did, you might hear a slight creaking noise coming from the moving parts of the headphones. The Active Noise Cancellation (ANC) takes care of it but, like most other pairs, these headphones aren’t light or secure enough for running.


And now for the sales pitch. The PLAYGO BH70 has a host of useful tech. But the ones you really should care about are ANC, Bluetooth 5.0 and a very capable Qualcomm aptX LL (Low latency) audio codec. In top features, there’s a proximity sensor that detects when you take the headphones off (pause) and put them back on (play), while another mutes the sound and lets you get a quick word in as long as the left ear cup is covered. These are some very useful attributes for a pair of headphones but nothing that we haven’t seen before.


What’s new, in fact, is an Artificial Intelligence-based hearing sensitivity test (on the PLAYGO app) that optimises the sound accordingly to one’s hearing blind spots (no way to test its efficacy) and a hybrid ANC (different for bus/train and airplane), which, in theory, optimises noise-cancellation according to its surroundings. In practice, the pair promptly modulates the low frequency sounds (like the humming of your AC or your laptop fan), but has little effect on lower frequency sounds (like banging doors) and higher frequency sounds (like a clap). A cheaper Sennheiser HD 4.50 SE (Rs 11,059) does a slightly better job and somewhere between the Sony WH-1000XM3 (Rs 24,990) and the Bose QuiteComfort 35 II (Rs 24,959) is the gold standard of ANC in over-ear headphones. The BH70 is unremarkably average.


The company claims that the Bluetooth-only headphones (no 3.5mm jack) can run for a maximum of 24 hours on a single charge. During my test runs, its 1,000mAh battery lasted around 16 hours with ANC and between 17 and 20 hours without it. It’s a very impressive feat, nonetheless.


The PLAYGO BH70 generates a full, bright sound with clear mids (vocal range). The high impedence gives it enough power to be menacingly loud and the 40mm driver is good enough to cover the full spectrum of sound (20 to 2,000 Hz). The sound profile, however, gravitates towards higher frequencies. And this is where the headphones particularly falter. While the overall sound would seem balanced, there’s an unmissable sibilance (the hissing sound that comes with the Ss). The headphones have a very intuitive and simple equaliser app (Android and iOS) to manage it, but it’s annoying nonetheless. Listening to Catnapp’s “No Cover”, which has a heavy sub-bass and high-pitched vocals, reveals the brilliance and bares its limitation at the same time. The bass is above ordinary and the high treble is plain bad. 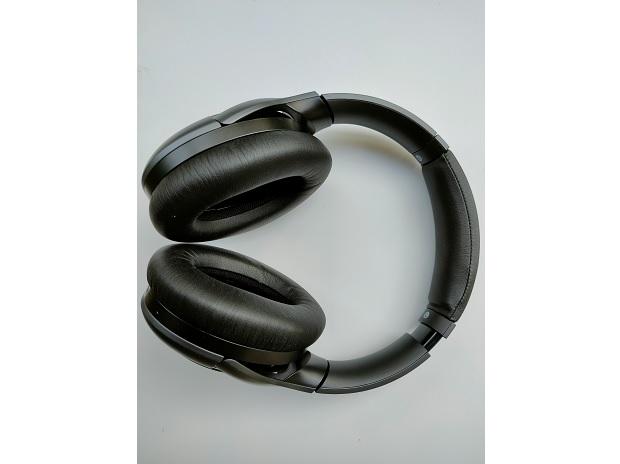 
The PLAYGO BH70 is one of the very few headphone pairs that aren’t awful for calling. It also has an IPX4 water resistance, a long battery life, good passive and active noise cancellation, and some intuitive features. It charges with a USB-C cable and comes with a hard case (a rarity at this price point). But the sound is slightly underwhelming. And it does not have a 3.5mm audio jack in case the battery runs out or NFC or a built-in voice assistant, everything you would get in the bass-heavy Sony WH-XB900N (Rs 16,750), along with full touch controls (I know I made a case for spending less than Rs 15,000, but this pair is worth the extra bucks). The PLAYGO BH70 (Rs 14,999) is best bought at a bargained price.