THE WEALTH Home
Home Opinion It’s not too late for governments to ensure that vulnerable get cash... 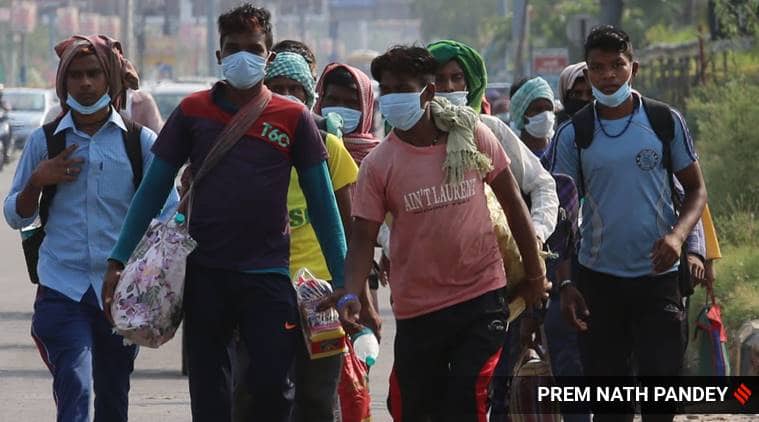 Migrant labourers in Ghaziabad on their way home to Jharkhand.

Scenes of migrant labour returning home, thirsty, hungry and helpless shall be a scar on India forever. Images of men, women and children walking in 44 degrees Celsius heat, on dusty roads and fields, often subject to police lathis, at times densely packed into trucks and tempos, a young man cradling a dying friend, a mother delivering her baby by the roadside, dry rotis and stale eatables splattered on railway tracks as bodies crushed under a train are taken for cremation unknown and unsung, the mad rush at disorganised bus and railway stations, are now firmly embedded within our minds.

India has disappointed itself hugely in the way it handled the migrant labour issue. We forgot that they are not beggars. We forgot that they are men and women who come to cities with a dream of improving their lives and that of the families they leave behind at home. Urban India has broken their trust. They are now the “other” we have cast aside even as we strive to bring back “people like us” from across the world.

Is it not astonishing how millions were left to their own devices to reach home among panicking state governments and district administrations? There is no similar precedent of collective and administrative failure anywhere in the world. First, the government stopped them, subjecting them to intense physical hardship and mental trauma. Then they were allowed to leave amidst great confusion about the availability of trains and buses.

How could governments expect them to stay back in such hardship with minimal arrangements? Why did so many weeks pass before the government deployed trains and buses to help the migrants reach their home states? Why could district collectors not arrange water tankers every few miles when a caravan of hungry, tired human beings was walking through their districts? Why could food packets not be distributed? Why could bandages and medicines not be provided for those with injured feet or other ailments? Why could school buildings, temple and mosque premises not be used to house them at night? Who will take responsibility for this human tragedy of biblical proportions?

Though robust statistics are not available, Ravi Srivastava, a leading authority on labour markets, assesses that some 10-12 million persons may be desperately trying to get home by whatever means possible.

While the plight of the migrant workers and, in some cases, their families, is the most wretched of all, they are by no means the only ones hard hit by the sudden imposition of the stringent, country-wide lockdown without any prior intimation or adequate preparation. Based on Census projections, there are at present about 450 million persons in the workforce. Of these, there would be around 200 million informal workers outside agriculture who have been left with no work, no income and, hence, no food following the lockdown. This would include casual daily wage earners as well as self-employed workers such as vendors, carpenters, plumbers, etc. These informal workers (including the migrants) and their families probably add up to some 600 million persons.

Opinion | Food before cash: Because PMJDY cash transfers will exclude many of India’s poorest

Given the unprecedented scale of the humanitarian disaster facing this entire class of informal workers and their dependents, prominent intellectuals, including three Nobel laureates, have been urging the government to launch liberal schemes of free food and income support for the population at large during these critical days. One of us had earlier estimated the cost of such additional food and income support to add up to about 3 per cent of GDP.

Against this background, the Rs 20 trillion package has turned out to be a public relations disaster. Soon after its much-hyped launch as a 10 per cent of GDP recovery package, the actual fiscal stimulus amounted to a mere 1 per cent to 1.5 per cent of GDP. The rest amounted to promises of enhanced credit to various target groups such as MSMEs, NBFCs, farmers, etc. These are promises on which the banks and other financial institutions may or may not follow through. None of this is direct extra money-in-hand for these groups which is immediately needed. Particularly disappointing is the measly allocation of Rs 40,000 crore or 0.2 per cent of GDP for MGNREGA and only Rs 3,500 crore (0.02 per cent of GDP) for free rations to migrants for two months.

It is also baffling why the government did not focus its messaging on the large, genuine fiscal stimulus it had already provided before the latest package. The additional government borrowing announced prior to the package, together with the fiscal deficits built into the central and state budgets, the 2 per cent of GDP additional borrowing headroom now provided for states and the 1 per cent to 1.5 per cent of GDP actual fiscal stimulus in the package add up to a large stimulus of well over 10 per cent of GDP. But unfortunately here, again, only a very small component has been set aside for humanitarian relief through the PM-Kisan Yojana, MGNREGA and subsidised food rations.

Why is the government being so tight-fisted in its support for the poor?

Even now it is not late for the Union and state governments to ensure that the “out of work” people get some cash in hand for the next few months. The supply of food grains is not enough. There is need for other items of use in daily life. Besides, this will push up demand and stimulate the economy.

This article first appeared in the print edition on June 4, 2020 under the title ‘Crisis and a tight-fisted response’.

(Jung is the former Lieutenant Governor of Delhi and Mundle is a former member of the 14th Finance Commission and Distinguished Fellow, National Council of Applied Economic Research. Views expressed are personal)

Best of BS Opinion: The myth of rational voter, the lost...

Kanpur stumble upon: Letter via slain UP cop hints at insider...