On August 7, India breached the psychologically significant mark of 2 million COVID cases, just three weeks after it announced crossing the first million. This is significant in the sense that India’s second million corona cases came faster than the United States and Brazil, the two worst-affected countries due to the pandemic.

It took India 149 days to go from discovering its first case in Kerala’s Thrissur on January 30 to 5 lakh (half million) cases on June 26. In contrast, the US and Brazil reached half a million cases far faster, in 81 and 96 days respectively. From there, the two countries took slightly less time than India to reach one million cases. India took 20 days to record the next 5 lakh cases, US 17 days, and Brazil 19 days.

Since then, India has been in a league of its own, racing from one to two million in just 21 days, far faster than the US (43 days) and Brazil (27 days).

The numbers also demonstrate how the pandemic has spread, with the share of Maharashtra, Tamil Nadu and Delhi declining in the second million cases, and that of Andhra Pradesh, Karnataka, and Uttar Pradesh rising.

The silver lining in India has always been around mortality. The second million cases saw fewer deaths than the first, and it’s possible that deaths proportionate to total cases are reducing as the pandemic progresses and care improves.

India recorded more than 25,000 deaths till one million cases, with a fatality rate of 2.55 percent, and just over 16,000 deaths till the second million, with a fatality rate of 2.06 percent. But given that infections are now being reported at a far faster rate, and there’s an average 10-day gap between a case being discovered and the patient’s death, it is possible that current death rates do not give the full picture. 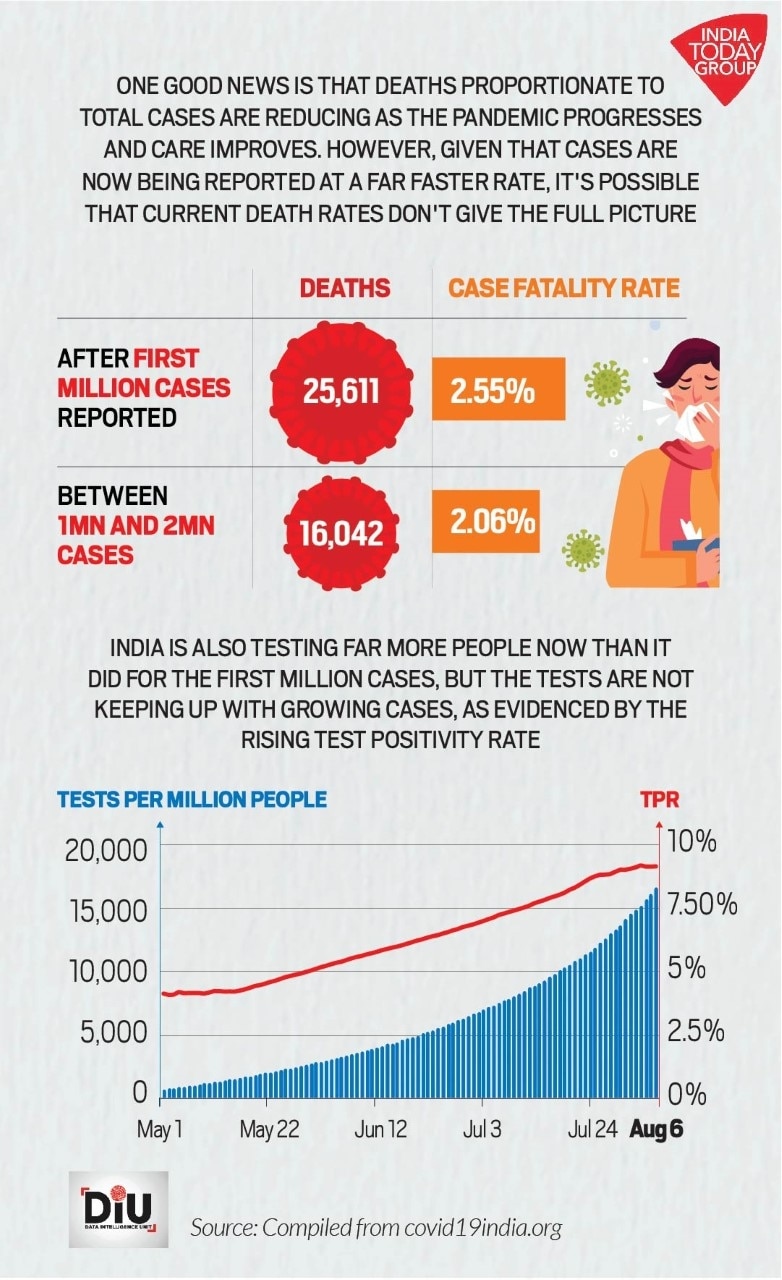 Testing too appears to be a silver lining, and while it is true that India is testing far more people now than it did for the first million cases, it’s not necessarily enough. Tests are not keeping up with growing cases, as evidenced by rising positivity rates. India is now testing more than 16,000 people per million, with a positivity rate of over 9 percent.

As the pandemic speeds up in India, the milestones are coming thick and fast – and the third million cases could come even faster.

This story has been published from India today feed without modifications to the text Only the headline has changed.

Trump has walled himself off from America's conversation on racism

Babri case: LK Advani, Uma Bharti will have to be in...