A man passes a mural depicting a nurse wearing scrubs and face mask in the Shoreditch area of east London, following the introduction of measures to bring England out of the coronavirus lockdown, Thursday June 4, 2020. (Dominic Lipinski / PA via AP)

Europe could likely see a second coronavirus outbreak in autumn this year, said WHO’s director of climate change, environment and health, Dr Maria Neira. Her statement was, however, tempered with cautious optimism. “The eventuality of a second wave is there, but we are still in the first wave. Our health systems are now better prepared to treat patients and the general healthy behaviour in Europe has increased with people now more aware of the virus and their responsibilities,” said Dr Neira during an interaction with the indianexpress.com at a press briefing on ‘EU Health Recovery’ organised by the WHO and Every Breath Matters on Tuesday.

As Covid-19 cases across Europe witness a downward trend and lockdown measures are being gradually lifted in phases, the question is if the continent is prepared to meet the health challenges arising out of a possibility of a second wave.

The total positive cases in Europe stand at 2,146,986 ever since the first confirmed case was reported on January 25. Total number of deaths has risen to 180,135 with the UK recording the most number of casualties at 39,811.

Dr Neira’s observation comes weeks after Andrea Ammon, director of the European Centre for Disease Prevention and Control, in an interview to The Guardian, warned of a second wave in Europe even as several countries continue to ease lockdown restrictions, reopen borders in a bid to rebuild their ailing economies hit hard by the pandemic.

“In case a second wave happens, it won’t be of the same magnitude as the first. And if it’s the case, then that means we didn’t learn anything. But if you’re prepared for the worst, then you are surprised for the better, and that’s a good thing. We know that the overall immunity level of the general population in Europe is low at 5-7 per cent. So we need a strong epidemiological response system that can detect cases fast and minimise the risk,” said Dr Neira.

“We cannot live in a permanent state of fear and anxiety because that’s not healthy either. We should not be too paranoid, at the same time, not be too relaxed in terms of measures we need to take to safeguard ourselves from the virus,” she added. 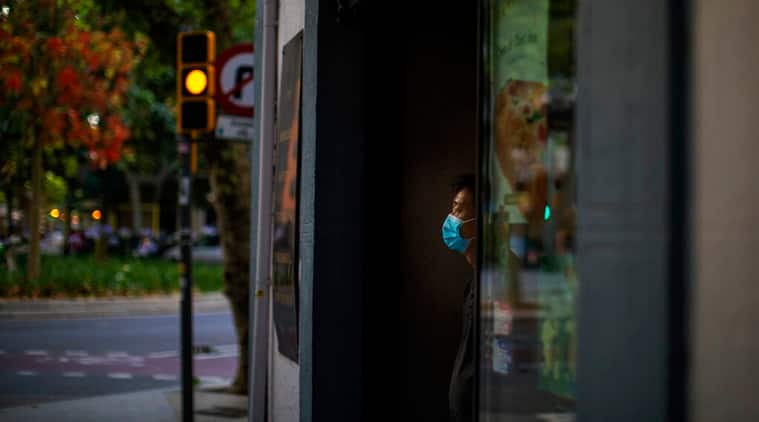 In this Sunday, May 31, 2020 photo, a waiter wearing a face mask waits for customers in a terrace bar in Barcelona. Spain’s national statistics office said that it received zero international tourists in April after the nation had closed its borders at the height of its coronavirus outbreak. (AP Photo/Emilio Morenatti)

For Spain, one of Europe’s worst-hit nations with at least 240,326 cases and 27,128 deaths as per Johns Hopkins University, the only way to contain coronavirus in the absence of a vaccine is to heed the message from the government authorities, medical and scientific community. While the infection and death rates have slowed in the country, Spanish authorities are closely monitoring the situation ahead of a planned reopening of borders in July.

Teresa Ribera, Spain’s vice-president and minister of the ecological transition, who was also part of the EU Health Recovery briefing, told indianexpress.com that “the only response that matches Spain’s need of security and safety is to find a vaccine or a treatment” something she “doesn’t know when it will happen”.

“However, it’s important to keep an eye on how things evolve. Transparency in data on epidemics is important, but equally important is learning about the public capacity in reacting to the virus and anticipating any additional risks that we may face,” said Ribera.

“To stay in a permanent lockdown doesn’t make sense. So we need to fear, but restrict this fear to normal life because that could be madness otherwise,” she added.

But recovery from pandemic needs to be green

The wrong pieces of our puzzle became very visible due to the crisis, said Dr Neira. But now, she said, it’s all about how we can pick up the pieces shaken up by the pandemic and do a better construction with what we have. “Now that we have the diagnosis, we can put in green walls to protect the health of people and it’s feasible.”

A few weeks back, to recover from the health and economic crisis due to the pandemic, the European Union had unveiled a massive 750 billion-euro ($824 billion) stimulus plan on May 27 that makes its climate-neutrality strategy the centerpiece of the recovery package, with a skew toward EU members such as Italy and Spain, which are among the worst-affected countries. The EU Green Deal, in theory, has attempted to bring parity between the poor and rich EU member states through green conditions attached with economic recovery.

On its part, Spain, a few days before the EU stimulus package was announced, had introduced an ambitious draft climate law that, if approved, would ban all new coal, oil, and gas extraction projects, bring an end to fossil fuel subsidies, and clearly outline a pathway to generate 100 per cent renewable energy and reach carbon neutrality ‘no later than’ 2050.

According to Ribera, the Spanish government is trying to prepare itself and its industries for a future geared towards renewable energy generation and the socio-economic and political transformations that come with it. “We know that we have environmental burdens that will last and a financial burden as well in order to facilitate the economic recovery. But what we needed to avoid was an additional third burden linked to the fact that we may be wasting our money in facilitating the economic recovery. We needed to ensure, to the extent possible, that whatever signals we may send, they have to facilitate a sound, healthy basis for a new economic and energy system which is much more respectful of the environmental limits of the planetary boundaries,” said Ribera.

US buys nearly full stock of Covid-19 drug remdesivir, nothing for...

Atlanta man killed by police was shot in his back: Autopsy