“The option to use active duty forces in a law enforcement role should only be used as a matter of last resort, and only in the most urgent and dire of situations. We are not in one of those situations now. I do not support invoking the Insurrection Act,” he said during a briefing at the Pentagon.

Esper also attempted to explain his use of the word “battlespace” when discussing quelling violence on the streets amid civil unrest.

“It’s something we use day in and day out … it’s part of our military lexicon that I grew up with…it’s not a phrase focused on people,” he said. “In retrospect I would have used different wording.” 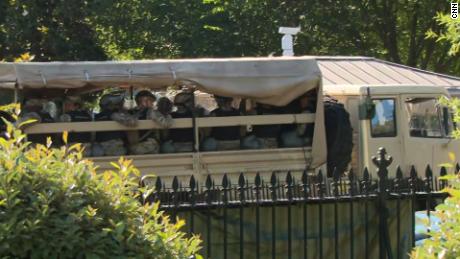 Esper also addressed the killing of Floyd, calling it a “horrible crime” and said “racism is real in America, and we must all do our very best to recognize it, to confront it, and to eradicate it.”

“The killing of George Floyd by a Minneapolis policeman is a horrible crime. The officers on the scene that day should be held accountable for his murder. It is a tragedy that we have seen repeat itself too many times. With great sympathy, I want to extend the deepest of condolences to the family and friends of George Floyd from me and the Department. Racism is real in America, and we must all do our very best to recognize it, to confront it, and to eradicate it,” he said.

Defense officials told CNN this week that there was deep and growing discomfort among some in the Pentagon even before Trump announced Monday that he is ready to deploy the military to enforce order inside the US.

As tear gas wafted through the air in Lafayette Park across from the White House, Trump announced from the Rose Garden that if state or city leaders refuse “to take the actions that are necessary to defend the life and property of their residents,” he will invoke the Insurrection Act, an 1807 law that allows a president to deploy the US military to suppress civil disorder.

Esper and Gen. Mark Milley, chairman of the Joint Chiefs of Staff, have faced a flurry of questions in the wake of Trump’s comments, pressure that culminated in Esper’s appearance at the Pentagon briefing room podium Wednesday.

Exclusive: New Nepal map permanent but we are ready for dialogue,...