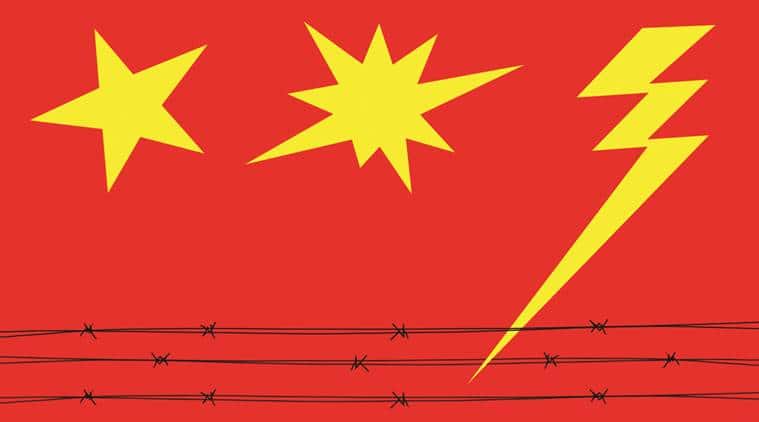 Wolf Warrior diplomacy is a phrase popular in China nowadays. Aggression is the panacea for both domestic and international challenges, Xi appears to think. (Illustration: C R Sasikumar)

“Yi pai hu yan,” sneered the Chinese foreign minister when US Secretary of State Mike Pompeo said the regime in China was comparable to that of the Soviet Union — “a communist, tyrannical regime”, but the Chinese people “are a great people”. The Chinese phrase is generally derogatory and can be interpreted mildly to mean “a bunch of nonsense”.

Making a distinction between the people and the regime in China is a favourite pastime for many in the US. Mike Pottinger, the US Deputy National Security Advisor, addressed the Miller Centre of the University of Virginia recently. Speaking in fluent Mandarin, Pottinger recalled the student protests at the Tiananmen Square a hundred years ago on May 4, 1919, that had led to the Chinese leadership refusing to sign the Treaty of Versailles. “Weren’t they a broadside against the Confucian power structure that enforced conformity over free thought? Wasn’t the goal to achieve citizen-centric government in China, and not replace one regime-centric model with another one? The world will wait for the Chinese people to furnish the answers,” he told the students, ostensibly suggesting that the spirit of the May Fourth Movement would return in China.

One should not be surprised when Chinese leaders sneer at such suggestions. Those suggestions betray a general lack of understanding about China. Francis Fukuyama, in an article in Foreign Policy, traces the authoritarian history of China in the last two millennia and aptly concludes that the so-called revolution, if any, will come not from the bottom, meaning the people, but from the top — the ruling oligarchy.

China is a great civilisation. Yet, under the Chinese Communist Party (CPC), it is a nation driven more by history. China could be understood only by understanding Mao Zedong’s Long Revolution from 1911 to 1949. British historian Eric Hobsbawm had described 20th century as a “short century” spanning from the start of the World War I in 1914 to the collapse of the Soviet Union in 1991. The Chinese scholars further shorten it by describing it as the “Short century of the Long Revolution”. And the message of that revolution is the domination of the state.

Opinion | As China intrudes across LAC, India must be alert to a larger strategic shift

Revolutions came to China, but from the top. The Cultural Revolution was imposed on hapless Chinese people by Mao and his Gang of Four. Top leaders including Deng Xiaoping were sent away to the countryside, so was a young Xi Jinping. Later revolutions were led by these two Cultural Revolution veterans. However, the two drew opposite inspirations from it.

Deng came to power in 1979 and became a major reformer. His “four modernisations” led China to become a “socialist state with market economy”. He laid the foundations for the modern-day economic power of China. It may be worthwhile to recall that when Deng began his reforms, China’s GDP was at $191 billion while India’s was $186 billion. Four decades later, China is five times bigger. It was a revolution engineered at the top.

But the same Deng showed utmost cruelty towards the student protesters at the Tiananmen Square in 1989. June 4 was the day when the PLA, under Deng’s orders, had ruthlessly crushed the student protests for a more open political system. A less known fact is that behind this brutal repression was a brewing leadership struggle within the CPC. Deng had called for political reforms for the effective implementation of his economic reforms. Two central committee leaders, Hu Yaobang and Zhao Ziyang, who were made the general secretaries of the CPC successively, were at the forefront of drafting the political reform programme. But when student protests broke out first in 1987 and then the famous Tiananmen Square protests in 1989, the two leaders were purged by Deng. Hu died in 1989 and Zhao was put under house arrest after being removed as the general secretary in 1989.

Popular revolutions are not tolerated in CPC-led China. But top-down revolutions do happen. The latest revolution to export Chinese influence far into the world began with the rise of Xi Jinping in 2013. His rise as the supreme leader was followed by the insertion of “Xi Jinping Thought on Socialism with Chinese Characteristics in a New Era” into the CPC constitution. Its main thrust is twofold: Making China a nation with pioneering global influence and building a world-class military force.

Opinion | China’s war on India: Xi is playing for high stakes for another major plank in Chinese nationalism

The greatest challenge to Xi’s thought came in 2020 in the form of the pandemic. Internal discord seems to have been suppressed. But external pressures, especially from the US, continue. Faced with such situations in the past, China had reacted in a way that Sun Tzu would describe as “the highest form of warfare is to attack the strategy itself; the next, to attack the alliances”. When the Sino-Soviet relations deteriorated after 1956, leading to Mao calling Nikita Khrushchev a revisionist, China had used war with India, a perceived Soviet ally, in 1962 to convey to the Soviets its military superiority.

Besieged with multiple problems — Hong Kong, Taiwan and the US externally and economic and pandemic challenge internally — Xi seems to be returning to Mao’s Red Book. In the famous Chinese movie Wolf Warrior II, the protagonist, Leng Feng, a retired Chinese army commando, is seen rescuing people from a civil-war torn African country under the heel of an American mercenary. In the final scene, the fictional hero holds the Chinese flag aloft, while the awestruck enemy backs off seeing the flag. Wolf Warrior diplomacy is a phrase popular in China nowadays. Aggression is the panacea for both domestic and international challenges, Xi appears to think.

This historical China is what we confront on the borders and in diplomatic circles. India has matured its border management and diplomatic manoeuvres over the last few years. “Proactive diplomacy together with strong ground posturing” is its new mantra. From Doklam in 2017 to Galwan Valley and Pangong Tso in 2020, India has been consistent. A mature China, that does not resort to 1962 tactics, this time replacing Khrushchev with Trump, nor is bent upon provoking nationalist sentiments back home to ward off leadership challenges, would help roll back the situation.

This article first appeared in the print edition on June 4, 2020 under the title ‘Wolf Warrior Diplomacy’.

Inside Track: Cabinet reshuffle on the cards?